23 Best Ways to Get Local Channels Without Cable

By purchasing an antenna, you can easily be able to watch your local channels comfortably and for free. The number of local channels depends on the city you live in and how close you are to the Broadcast tower. This HDTV antenna is easy to install, and you can use leftover cables that may have been left by your network providers to install the antenna. In addition, you can learn how to get tv reception without cable or an antenna.

2. Choose the type of antenna

There are different types of antennas to choose from depending on your location about the Broadcast tower and the type of city. For example, if one lives in a major city, then one can choose a simple directional antenna since the network tends to come from one main direction.

On the other hand, if the networks originate from multiple directions, then it’s recommended for one to install an omnidirectional antenna. One can also decide to purchase either an indoor antenna or an outdoor antenna.

Some websites allow one to stream local channels online for free. Some of these websites include;

Amazon Instant Channel: This is a streaming provider that enables one to be able to access local channels. It’s one of the best sites where one can watch older movies. You can use either the Amazon fire stick or Amazon fire TV cube to help access the contents. The two you connect to the HDMI port of your TV set and then connect with WIFI. After all, you can also use free satellite tv with a dish.

FuboTV: This online streaming provider initially was known for offering only soccer, but now you can watch other sports through channels such as FS1, BTN and FS2 and local channels including Fox, NBC, and CBN. One can also record previous shows that one might have missed up to 3 days.

PlayStation Vue: This is another service provider that allows free access to local channels in some cities. The site offers five-day free trials.

DirecTV Now: This is another way that one can stream local channels in the U.S without cable. Some of the channels that one can watch include TBS, TNT, AMC, Paramount Network, AandE, FXX, and FX. However, this online streaming service provider is expensive and offers poor features.

All local TV stations have apps that allow their users to access all programs, including live ones. You can thus install the official apps of these local stations which tend to be free. You only require a device that connects online such as a Laptop.

This is Google’s cable-free TV, which is different from the regular YouTube site. YouTube TV offers full access to local channels. It is also among the cheapest cable-free service provider since one can get over 60 local channels for only $40 a month. Some of the local channels you can watch on Youtube Tv include US Network, AMC, FX movies, IFC, Sundance TV, and FXX.

Read Also: How to Get WiFi at Home without Cable

This is one of the most common online streaming service providers, and it is also the cheapest in its purchase. You can use Sling TV to watch local news channels such as ABC, FOX, and NBC. It offers $25 for 30 channels and has a 7-day trial. This service provider also offers a variety of packages.

Triple play system tends to provide its buyers with free local channels as a form of a bonus. The system is known to have a better connection as compared to others. This is because the system uses a high-speed fiber for its connection.

9. Get Local Channels Through Mobile Apps

You can also get local channels through your smartphone apps such as Fox Now, CW, ABC, CBS all access, NBC app, and PBS video. You can then connect your Smartphone to your TV set by using a high-definition internet cable and an On-the-Go USB adapter. Everything is for your home with the internet plan, therefore, you need unlimited internet plans for home.

Roku is a small device that acts as a streaming player because it’s used to connect to other video streaming services online using either channels or apps. Roku TV offers over a hundred local channels. You can also download the USA network Roku channel, then sign in with various streaming services such as DirecTV.com, Sling TV, Fubo TV, among others.

DVR allows one to record shows from a digital antenna. The best DVR is the standalone Over-The-Air DVR. There are three types of standalone DVR that one can purchase to help in accessing local channels content.

This DVR allows one to be able to record four OTA shows at the same time, and one can store the content recorded for up to 150 hours. There are no monthly fees.

Like the Fire TV cast, the TiVo Roamio also allows its users to be able to record

Unlike other DVR, Tablo OTA DVR allows one to record shows as they continue watching. They also charge a guide fee of $5, which one can eliminate if they don’t take the guide.

16. Signing in for a free video streaming online

You can sign up for shows that allow free streaming of videos online. Some of the websites that one can sign up to include TV box, TV.com among others that allow access to local channels.

Some local libraries have updated databases that can enable one to be able to get local channels easily. So before visiting the local library, check online if their database is up to date.

This is a service provider that enables access to the local CBS Broadcast across the United States. By connecting to this Broadcast, one can watch local channels free of charge.

You should buy google Chromecast to install. This is a device that is installed in the TV set and allows one to be able to access local channels.

Some states allow their government to cater to the bills of their civilians who relocate to government schemes as remote workers. Some of these states in Minnesota, Maryland, among others. Usually, the government doesn’t pay for their TV cable but caters to the internet Broadcast bill; thus the people can use this broadcast internet to get local channels.

This is a device that is used as a media player allowing one to gain access to the local internet and storage media as well as viewing videos, music, podcasts, among other shows.

One can watch local news, sports programming, and even our favorite show without a cable by either using a digital antenna or choosing from one of the above-stated options. One needs to do research and compare several network providers to get the best deals possible. You also need to read the manufacturer’s guidelines when it comes to the installation of the devices. Internet connectivity is essential in most offices and homes today, including appliances that depend on wireless connections. Smart TVs, iPads, and smartphones are some of the devices we use for streaming movies and gaming online. Getting the best wireless router can help keep up with the growing need for wireless connectivity. Although there’s a brimming… There are many less expensive ways that one can get an unlimited internet plan for homes. This helps one to save money by getting the best deal that suits their budget. The bundled service is more advantageous over other services in that; They are convenient to use. You only require paying one bill for all… 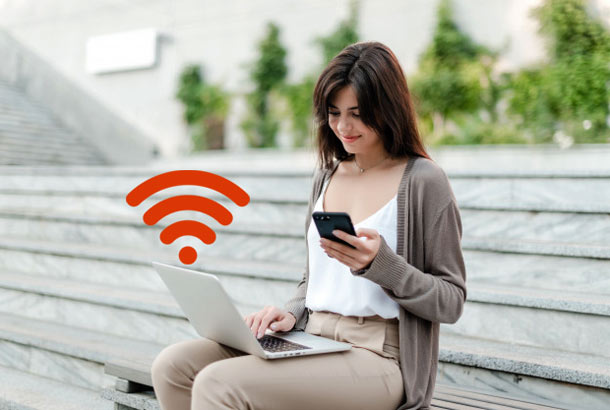 Whether you’re running across town or across the country and beyond, staying connected is important and one way to do that is a Wi-Fi hotspot. Such technology has become increasingly popular for business and pleasure alike, and with its popularity, the need for unlimited Wi-Fi hotspot plans is a reality. First, you have to choose…